Several studies comparing emetic pregnancy to serum maternal hCG have been written spanning more than half a century.  Schoeneck et al (1) presented evidence that there was an increased concentration of gonadotrophin in the urine of pregnant women who have the symptoms of nausea and vomiting, compared to pregnant women who are free of these symptoms.  They also stated that the greatest concentration of maternal urinary hCG was present from the 6th to the 14th week of pregnancy when nausea and vomiting were mostly encountered.  However, Soules et al (2) observed there was no obvious correlation between the concentration of maternal serum hCG and the severity of nausea and vomiting of pregnancy.  These symptoms were graded 0-4 in severity but the mean levels of serum hCG did not differ significantly among any of the grades in individual women.

Masson et al (3) agreed with the findings of Schoeneck for a group of women rather than individual women, finding higher serum hCG levels in pregnant women with nausea and vomiting than in asymptomatic women.  Jarnfelt Samsioe et al (4) formed a similar opinion, finding that serum levels of hCG in emetic women were significantly higher in early pregnancy, than the serum hCG levels of non-emetic women.  Kaupilla et al (5) confirmed this view, observing that women suffering from hyperemesis gravidarum had serum hCG concentrations significantly higher than normal between weeks 7 and 14 of gestation.

Holder et al (unpublished work 1979) found that in a series of 13 women who gave weekly samples of blood between weeks 6 & 14 from LMP with a final sample at 17 weeks from which serum hCG, βhCG, progesterone and oestrodiol were estimated. These values were related to the women’s symptoms of nausea and vomiting in the previous week that each sample of blood was taken (6). The correlations between maternal serum hCG levels and pregnancy sickness symptoms in individual patients were so limited that they were clearly insignificant, agreeing with the findings of Soules.  However, when serum hCG levels of those women with severe symptoms were compared with those with mild symptoms, raised hCG and bhCG levels were significantly associated with severe symptoms during weeks 7 and 9-12 from first day of last menstrual period (LMP), agreeing with the findings of Kaupilla, Masson and Jarnfelt Samsioe.  In addition, when the overall maternal serum hCG levels were compared with overall sickness symptoms for several weeks throughout early pregnancy, there was a correlation for maternal serum hCG (P<0.02) and bhCG (P<0.01) levels with sickness symptoms from weeks 6-11 from LMP.  This association became highly significant when bhCG and hCG serum levels and sickness symptoms were compared for weeks 6-17 from LMP (P<0.001). At the same stage of pregnancy the fall of serum progesterone during weeks 5-9 from LMP and its subsequent rise to week 17 showed an inverse association with the rise of pregnancy sickness symptoms in weeks 5-9 and fall of these symptoms from weeks 10-17 from LMP. Table 1 (6).

There are then some pointers to a association between rising maternal serum hCG and increasing symptoms of nausea and vomiting of pregnancy (NVP) at 5-10 weeks from LMP and declining symptoms of NVP in weeks 11-17 from LMP. However, when individual women’s symptoms of NVP are related to their maternal serum hCG, no significant association is found.  This may be due to the hCG/LH “spare receptor” syndrome, please see the section “Some Functions of hCG”. Added to that, we have been given the important information by Professor K D Bagshawe, Professor of Medical Oncology, Charing Cross Hospital School, London “very raised serum and cerebrospinal fluid levels of human chorionic gonadotrophin occur with choriocarcinoma in the absence of nausea and vomiting provided there are no gastrointestinal or cerebral metastases”. We now know that the isoform of hCG formed in choriocarcinoma is 100% nicked at the βeta-subunit residuals 44 and 45 or 47 and 48. Therefore the hCG’s bioactivity in choriocarcinoma is ablated (7). A certain association continues to be established between maternal serum hCG and pregnancy sickness symptoms.  When seeking the aetiology of this condition, we should consider hormones, cytokines or prostaglandins which stimulate the synthesis of hCG in syncytiotrophoblast cells (8) or which hCG stimulates, during weeks 6-10 from LMP being particularly interested in any that cause nausea and vomiting.

Goodwin et al have shown in 39 women presenting to the emergency room of Los Angeles County University of Southern California Women’s Hospital with a complaint of severe vomiting, hyperemesis gravidarum, compared to 23 control subjects presenting for confirmation of pregnancy or routine prenatal clinics of the same age, weight and gestational age that the concentration of maternal hCG was greater in hyperemesis patients, as was the concentration of free β hCG. A percentage free β hCG greater than 0.6 percent was found in 33/39 hyperemesis patients (85%) compared to 5/23 controls 22% p=0.01. The difference between hyperemesis and control subjects with respect to free β did not vary with gestational age (9).

This observation links hyperemesis gravidarum with conditions such as trophoblastic disease and Down’s syndrome in which the placenta is abnormal with respect to architecture and hormone production. This provides support for the view that hyperemesis gravidarum represents not an abnormal response of the mother to pregnancy itself, but is probably related as placental hormone metabolism. It would be important to know whether the increased free β sub-unit (and increased hCG itself) found in hyperemesis gravidarum is one end of a spectrum of abnormal placental production of hCG corresponding to the wide range in severity of nausea and vomiting seen in normal pregnancy (9). Holder demonstrated that β hCG also occurred with raised hCG in weeks 6-10 from LMP when symptoms of pregnancy sickness are increasing (6). 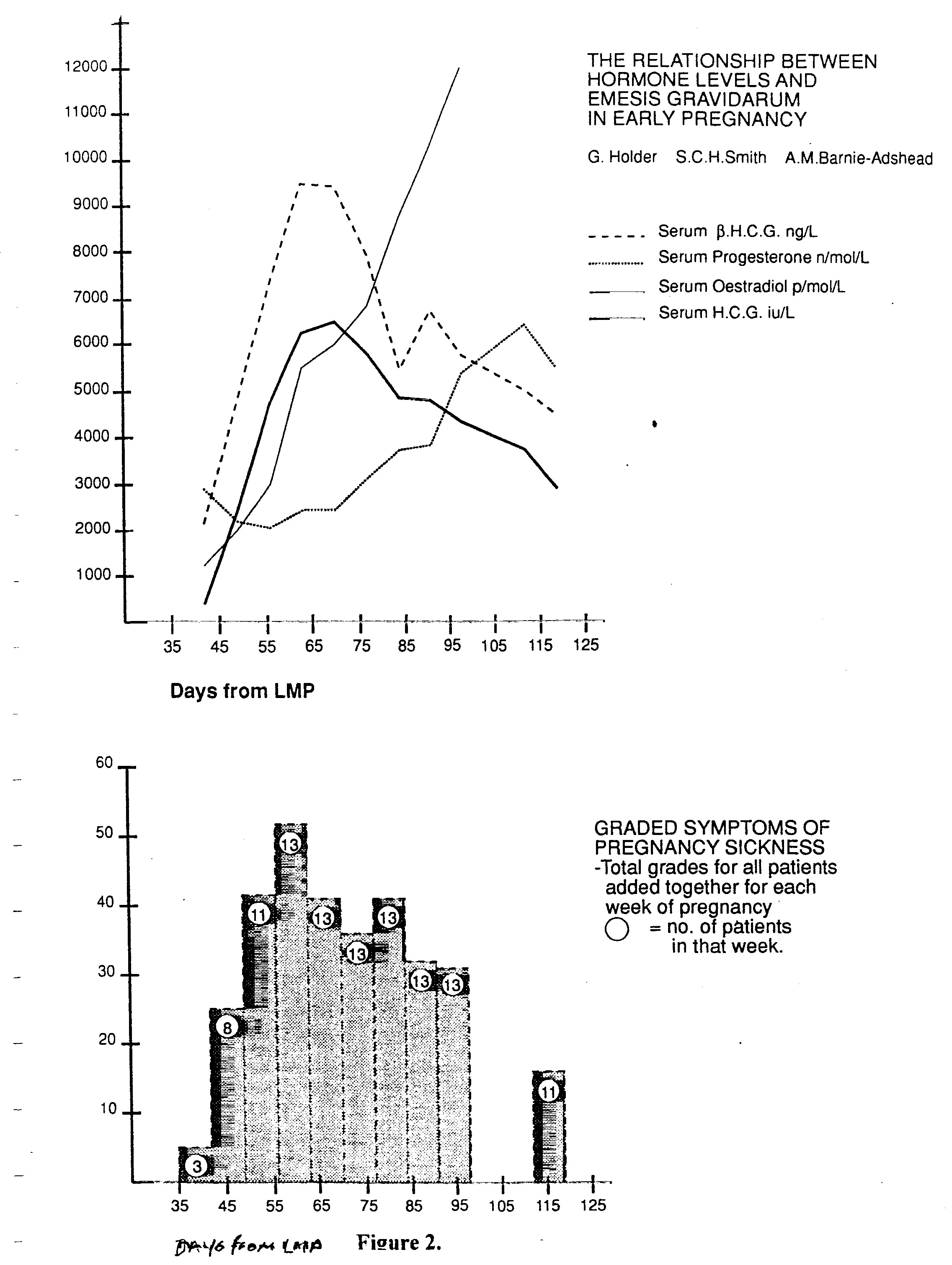 Numbers of observations in parenthesis.

Nausea & vomiting in pregnancy (NVP) is very common, on average it affects 70-80% of pregnant women to a greater or lesser extent.

85% of pregnant women have two episodes of nausea per day.

30% of pregnant women in paid employment need time off work due to NVP.

Pregnancy Sickness Support is open and operational as normal however our staff team will be working primarily...

15th May - International Hyperemesis Awareness Day This annual event is a great opportunity to raise...

Last night the PSSHQ team in Cornwall clapped and joined in with the #CornwallSingsFortheNHS to say a massive thank… https://t.co/wy1YENT8oO