A conspicuous feature of the human implantation site is the presence of trophoblast cells
(endovascular trophoblast) within the lumen of decidual spiral arteries. These trophoblast plugs are
continuous with the trophoblast shell occluding the orifice of the spiral arteries at the point of entry
to the inter villous space (Boyd and Hamilton) (2). The plugs consist of loosely cohesive cells
which move down the inner wall of the vessel like wax dripping down the side of a candle. These
loose plugs are thought to act as valves allowing plasma to seep into the inter villous space at low
pressures. In addition the trophoblast cells can be seen embedded in the walls of these spiral
arteries together with fibroid chains of musculo-elastic tissues to form spiral vessels into low
resistance sinusoid sacs which can maintain the utero-placental blood flow under all physiological
conditions (3). 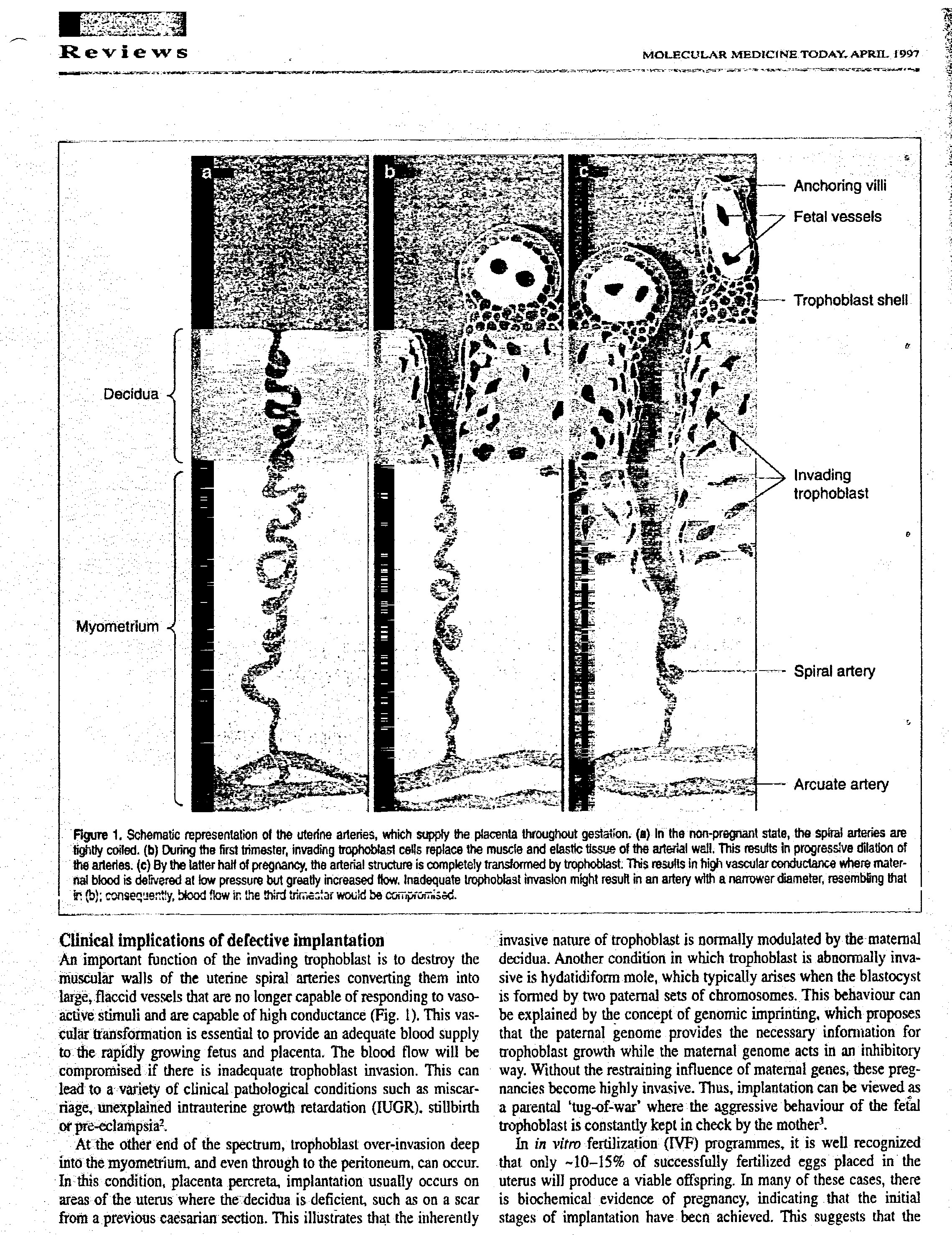 Spiral arteries are functionally occluded by trophoblastic plugs. These are integral parts of the
trophoblastic shell. The cohesivity between trophoblastic cells within the plugs is rather loose.
Fluid and very small calibre particles can percolate through the plugs. The intra vascular
trophoblast plugs do not incorporate with the vessel wall, nor do they acquire tight junctions with
endothelial cells. This implies that they are loose and must act like valves. Direct observation with
the chorionscope confirms this fact. Spiral arteries run a very tortuous course which is subject to
continuous changes. Physiologically there are always necrotic foci within the decidua. Arterial
segments also undergo necrosis. There are however new channels which are open. In serial
reconstructions a given artery may be opened several times and occluded by several trophoblastic
plugs. The length of a spiral artery is the same at 8 weeks as it is at term (4).
In the first few months of pregnancy endovascular trophoblast is encountered in the decidual spiral
arteries but not beyond the decidual myometrial junction. At 16-18 weeks endovascular trophoblast
was noticed in the myometrial segments of many spiral arteries which means a second wave of
endovascular migration is triggered off quickly after a resting phase of several weeks (1).
Endovascular trophoblast cells stained positive of IL-!/FDG$6*(:>2'&4&-$@Q-1 stimulates PGE2 on
cell surfaces (6) .

"The helpline was an amazing lifeline. I was at rock bottom and really needed help."

Nausea and vomiting in pregnancy (NVP) and hyperemesis gravidarum (HG) can have a profound psychosocial effect on women and their families; some women become suicidal or can consider termination

Researchers investigate the risk messages and advice given in pregnancy

Less than a week left to get in your grant applictions for the NSW Health HG Research Grant Programme, offering up… https://t.co/EAiL1tb8bj