References For An outline account of the anatomy of vomiting

5. due Bois A, Kriesinger- Schroeder H, Meerphol HG.
The role of serotonin as a mediator of emesis induced by different stimuli
Support Care Cancer 1995; 3 : 285-290

In animals with ablation of the area postrema (AP), vomiting seen in control animals upon
IV administration of a variety of drugs is abolished, as in the vomiting that follows motion,
ionising irradiation and chemotherapeutic drugs, at least in the species like the dog, which
show emetic responses similar to that of humans (1).


2. The AP, which lies outside the blood brain barrier, has the role of surveying the blood for
noxious substances (1).


3. All the substances that excite the AP neurones are also emetic in the dog (1).

4. The ultimate experiment was done in humans (2). Lindstrom treated 5 humans who
suffered from intractable nausea and vomiting, with local AP ablation and all patients
experience total relief of these symptoms.

5. The response to all excitatory substances (except glutamate) were similar, long latency,
relatively low mixed discharge frequency and a very long duration (1)

6. A prolonged action from the brief application of a transmitter on to a single neurone is
usual. These observations suggest the possibility that responses to all of these substances
have a common step or are mediated through a common second messenger (3). The
responses are indeed mediated through C’AMP. Pre-treatment of an animal with a
phosphodiasterase inhibitor should retard the breakdown of cyclic AMP and if involved in
mediation of the response, should reduce the threshold dose necessary to induce emesis.
We tested theophylline. Thresholds for all substances tested were reduced (3).

7. Our results are consistent with the possibility that C’AMP is the common second
messenger for these common excitatory substances. (1)

8. AP neurones were excited by serotonin (the urinary excretion of serotonin is not associated
with the intensity of NVP (2)) Histamine, Epinephrine and Norepinephrine about half the
time and at least for Histamine and Epinephrine, these responses are complicated in that
some neurones show inhibitory responses to these substances (1).

9. The percentage of responses from AP cells is so high, an average 50% of neurones studied
responded to the excitatory substances, the rate of responsiveness is so high as to suggest
that all of the cells have all of the receptors (1).

10.  Dogs with bilateral subphrenic vagotomy show no change in their sensitivity of IV
Apomorphin and vomited after irradiation with a pattern almost identical to that of the
controls. Therefore, radiation induced emesis is humorally mediated through some agent
released into the circulation subsequent to irradiation (4).

11.  The effects of PH on electrical activity of neurones in the canine AP were studied.
Excitatory responses were obtained upon application of PGs A1, B1, B2, F1a and F2a in
between 25-50% of cells studied. The excitation was very similar in pattern to that
observed to apomorphine, in that it had a relatively long latency, low maximal frequency
and prolonged duration (60 seconds). Since the AP is known to play a central receptive role
in initiating emesis to circulation toxins, these results suggest that prosaglandins may play a
role in the initiation of some forms of emesis (5).

13.  Frequently multiple applications of several substances would cause the neurone to become
spontaneously active at a low frequency; this spontaneous discharge would be maintained
for many minutes (3)

5. Briggs D B, Carpenter D O
Excitation of neurons in the canine Area Postrema by prostaglandins.
Cellular and Mollecular Neurobiol 1986 6 (4) 421-426. 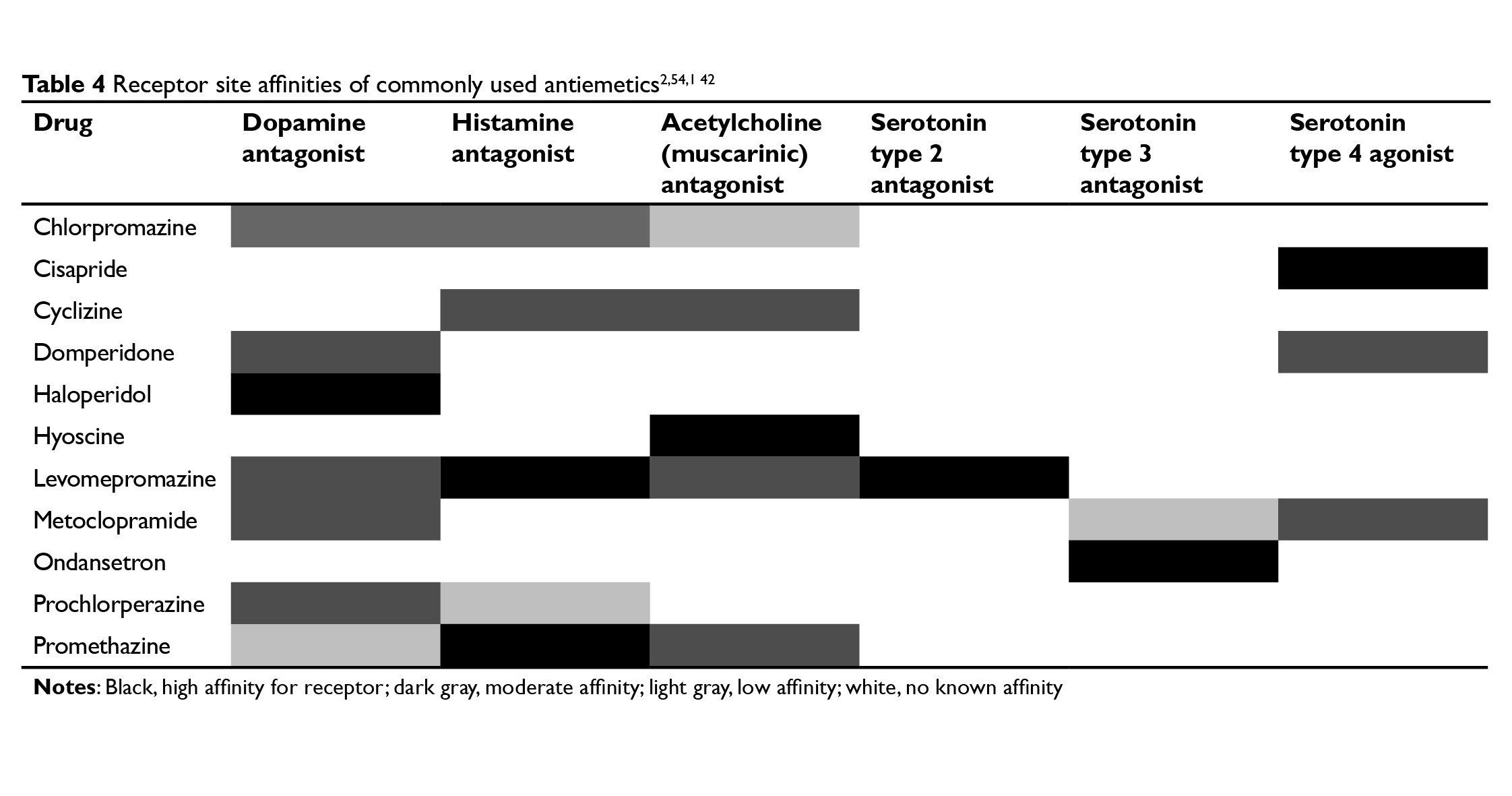 2. Gadsby R, Barnie-Adsehead AM.
Nausea and Vomiting of Pregnancy: A Literature Review.
www.pregnancysicknesssupport.org.uk

9. Mazzotta P, Magee LA.
A risk- benefit assessment of pharmacological and non-pharmacological treatments of
nausea and vomiting of pregnancy.
Drugs 2000; 50(4) : 781-800.

Recent evidence shows that postoperative recovery may differ between men and women. The
authors planned a prospective cohort study to examine the impact of gender or postoperative
outcome. Secondary endpoints included the incidence of complications one of which was
postoperative nausea and vomiting. The men (N.200) and women (N.222) in the authors study
were similar in terms of age, American society anaesthesiologists physical status and likely to have
a history of postoperative nausea and vomiting, 42 (19%) women versus 18(7.4%) men (P<0.001)
and to have received prophylactic antiemetic agents 102 (46%) women versus 70 (29%) men
(P<0.001) (1). The higher incidence of some complications among women, maybe attributable to
greater willingness to report them, however participants in the study were directly questioned about
nausea rather than being obliged to mention them without promoting. This makes it more likely
that the differences in nausea and vomiting between the sexes are genuine and important (1).
There is little available data on the incidence and causes of vomiting and nausea in an otherwise
healthy population. Therefore the authors of this article decided to undertake a survey to examine
the influence of age and sex on the emetic response. 596 participants completed questionnaires.
There were 65% female and 35% male participants ages ranging from 18-91years. The overall
incidence of vomiting and nausea at least once in the twelve months prior to completing the
questionnaire were 39%-54% respectively. There was no significant association between the
incidence of symptoms of gender although a higher frequency of nausea but not vomiting was
reported amongst women as compared to men (P<0.005). In contrast when the population was
grouped according to age 18-30years N=215, 31-60years N=197, >60years N=185. There was a
highly significant decrease in the incidence of both vomiting (P<0.0001) and nausea (P<0.0001)
with increasing age (2). Postmenopausal women (N=175) were less likely to vomit (P<0.0001) or
feel nauseous (P<0.0001) compared with those women who were still menstruating N=217(2). The
results show an age dependency in the incidence of emesis and support the evidence that many
autonomic functions become altered with age (2).
Age, sex, previous exposure to chemotherapy, type of chemotherapy, history of alcohol intake and
susceptibility to motion sickness have all been proposed as predictors of chemotherapy induced
emesis (3). Recently the authors analyzed the role of the new prognostic factor in chemotherapy
induced emesis in female patients receiving a first cause of FAC adjuvant chemotherapy; the
intensity of emesis during past pregnancy (EDPP)(3). 113 breast cancer patients receiving a first
course of FAC adjuvant chemotherapy in an out patients setting entered the study. The antiemetic
treatment was identical in all patients. The patients were classified in one of the following groups
according to the intensity of emesis during past pregnancy(EDPP).

Intensity of emesis in the first course of FAC chemotherapy according to EDPP grade.

EDPP= Intensity of emesis during past pregnancy.

A. Grade 0 EDPP no nausea and vomiting during any pregnancy.
B. Grade 1 EDPP nausea and vomiting limited to the early morning only in the first trimester
of pregnancy (normal emesis gravidarum).
C. Grade 2 EDPP nausea and or vomiting present during the entire day and/or extended to the
second or third trimester in at least one pregnancy (pathological emesis gravidarum)(3).
The mean age of the 87 evaluable patients was similar in the three groups (mean age 54, mean
age 55, mean age 50 groups ABC respectively.
The intensity of emesis in the first course of FAC chemotherapy in these three groups shows a
statistical analysis a significant positive correlation between the intensity of EDPP and the
intensity of FAC induced emesis (P<0.001). Eighty one percent of patients with grade 0 EDPP
obtained complete protection from FAC induced emesis while respective figures for grades 1
and 2 were 57% and 36% (3). This study suggests that EDPP may be an important prognostic
factor in FAC induced emesis and could be useful as a clinical marker for those patients who
require a more intensive antiemetic treatment(3).

Pregnancy Sickness is often called Morning Sickness but it can occur at anytime of the day or night.

A rewarding role working on our charity helplines within our support team   We...